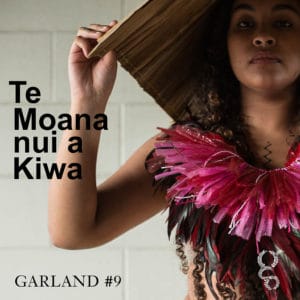 Special thanks to Kolokesa Uafā Māhina-Tuai and Luisa Tora for developing Moana content. Garry Nichols from Toi Māori has been very helpful, as have the local representatives on the editorial board, Damian Skinner and Warren Feeney.

This issue developed out of a roundtable at Objectspace in December 2016. From this emerged the focus on the plastic lei as a customary object that has adapted to a diasporic urban setting. It reflects a cultural resilience and invention that can be found across the wide expanse of Moana.

The cover image is from Reina Sutton who features in the online exhibition.

Tears of Tāwhirimātea: Carvings by Todd Couper by Karl Chitham

The Handshake journey: I am the water and the water is me by Neke Moa

Te Moana a nui a Kiwa: A sōlevu by Luisa Tora

What we practice in private by Ioana Gordon-Smith

Pearls for the people in Fiji by Neke Moa

Embodied history: Remaking and returning the midi to the Tolai by Lisa Hilli

Taonga and photography in the post-treaty settlement era: A case study of photograms by Mark Adams and Areta Wilkinson by Damian Skinner

Casting shadows: Areta Wilkinson and Mark Adams at the National by Harriet Litten

Tuhirangi writes on the sky by Michelle Montgomery

Knot Touch: From greenhouse to gallery by Jaqui Knowles

Composing decomposition: An exhibition by Louiseann King by Clare Needham

I like reality, it doesn’t terrify me. by Kristin D’Agostino

The lei, the garland and the daisy chain by Fran Allison

A Shanghai lei over: the plastic jewellery of Lauren Simeoni by Katharine Ahern

Mala: the garlands of India by Mitraja Vyas

And They Lived Happily Ever After: Object narratives from a land far away by Sahr Bashir